To start with I thought what the heck! I have no problem speaking in public, but then the doubts crept in. What if NOBODY watched?

I relaxed a little because, as it was a group challenge I knew we would be supporting each other. “The Cats” would have my back.

Then I had the decision to make. What would I say?!?!

Luckily for me this challenge came at the perfect time. My daughter had just started secondary school, so I ended up waffling about that!

Not too many people watched me live, which was fine. I felt more relaxed. I had seen the other authors do theirs, they had been roughly every hour since 6AM and I was at 1PM.

Each one, as nervous as they were doing it, got a huge buzz doing it.

Just a few days later I was amazed to see my video had been viewed 1K times!!! Little old me, Carrie-Ann from Sussex, had had that many people watch my video!

Well, I couldn’t believe it. Ahhhhhhhhhh! Ok, it’s not viral (not that I would ever expect it to be) but that is a lotta lotta people. I’m thinking of doing them regularly, like once a week? What do you think?

Anyway, if you are one of the thousand people who watched it, I thank you. If you missed it, check it out below!! 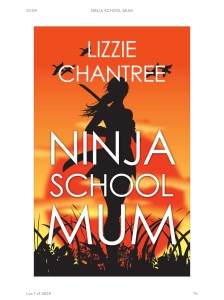