Why do we get so attached to our pets? They become such a huge part of our lives. You find yourself worrying about them when they come home later than expected.

I miss my old cat Pussy-Willow so much. I had her for almost 19 years. She was a beautiful tabby who loved nothing more than to curl up with me in the evenings.

She got attacked by a fox a few years ago now. The attack didn’t kill her, amazingly, but a neighbour told me she was certain it would. Her wounds were very bad apparently.

After what felt like fifteen phone calls trying to find out who had taken her and if she was coming home I finally got told she could come home tomorrow. I was made up.

Due to the neighbours description of her torn throat and stomach, I expected to see her bound and patched, wearing one of those cones around her neck. This wasn’t the case.

Apart from a slightly shaved patch she looked no different. If anything she looked younger. I was so happy to have her home and snuggling again.

The following day my son, he was about 2, opened the back door and she ran out never to return.

She was very old. I looked for her for weeks but I knew deep down she had been through a lot and cats have a tendency to go away to die. I have woods behind my house so plenty of places for her to disappear to.

Months after I was scrolling down my Facebook and a girl I went to school with put up a post of two black kittens that had been found in a bin liner next to a river. I was disgusted! Do people really do things like that?

The same post went up pretty much everyday for a week and I had to step in. They needed to go together as they relied on each other for comfort.

Well I won’t tell you what Disney film was big at the time but they ended up with the names Elsa and Anna.

Elsa (behind) and Anna (in front) cuddled up.

The whole family was happy to have animals back in the house, though they soon started causing havoc jumping all over the place.

Elsa was the confident one, always first to explore new areas of the house, Anna was more shy. She loved to lay on my belly and get stroked.

Four months later my friend was buying a puppy. Living next to the woods I had always wanted a dog, but to me dogs are Rottweilers and Alsatians. She was buying a chug! This was basically a mutt, half chihuahua half pug. “You’ll love them” she said, “I bet you get one” she said. “No way” was my reply, “I want a dog not a rat”

Well long story short, Crystal joined the family a few weeks later. I fell in love with her big time when she placed her little paw on my knee. 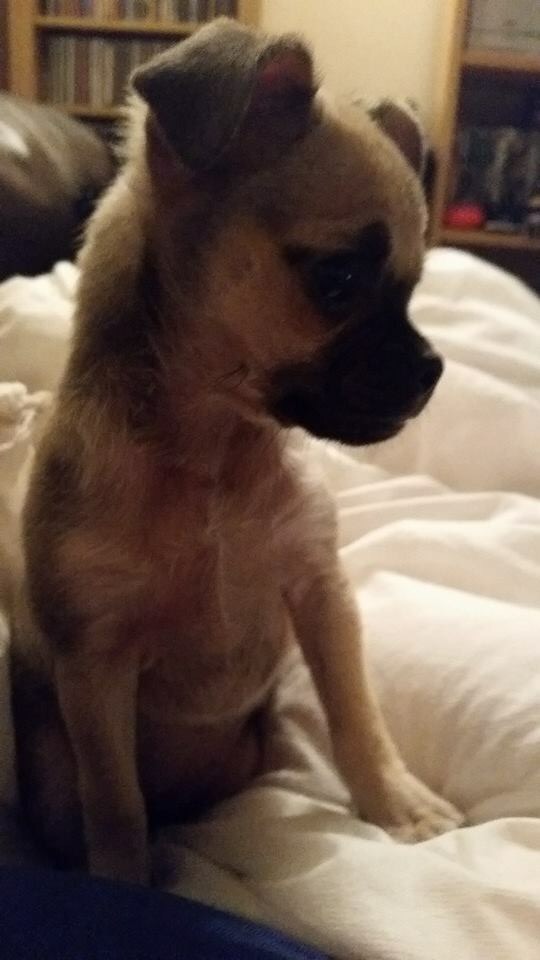 Crystal when we got her. You can see why now!

She was so small. Her favourite place to sleep was my shoulder! Wherever I went, she went.

So suddenly my house hold was me plus three mini humans, two cats and a dog!

With hindsight if I had known I was going to get a dog, I probably wouldn’t have said yes to the cats, but I don’t regret them. I love them all.

“Get rid of the animals” people say to me but in case you haven’t heard, animals are for life.

I told you before that Elsa was brave and liked to explore. She also liked to escape. Well this inevitably lead to three kittens being born (first one in a litter tray! Lovely) so we welcomed in Spaghetti, Meatballs and Cheese.

The children loved having kittens in the house and they were so good at leaving them alone when told to. Elsa used to like me to babysit. She would carry the kittens from their box and dump them on my lap one at a time then disappear to another room for a relax. It’s mums like her that give young mums a bad name.

On a serious note though she was a brilliant mum, and Anna was a proud auntie. Even Crystal, who was smaller than the cats when we got her and seemed to think she was one, would stay close and guard them.

Sadly two of the three died, and the woman who was lined up to buy them wanted two, so Cheese who was the youngest and the only boy ended up joining the family full time.

Yes it’s manic. Yes sometimes I want to get rid of them all (but then I can say that about the kids) but I do love my fur babies.

Cheese and Crystal are very close

They are all very close. Cheese cleans Crystal. Elsa cuddles Anna. They curl up together and chase each other around when they are in a playful mood.

They also all really love me. On the odd occasion I fall asleep on the sofa, I wake up to all four of them either on or very close to me. The other morning I woke up to Elsa laying on me like a scarf.

Her whole body was curled around my neck. I opened my eyes and she just looked at me as if it was totally normal. Her sister was curled up behind her with Cheese curled up on my legs and Crystal was so close to my side I was terrified to move in case I squished her.

This was also the day I woke up desperate for the loo!

When I have sad days, stressful days, depressing days I can always rely on my fur babies to show me love. Even if the children don’t! And when I come home from work Cheese is always out the front waiting to greet me.

Cheese, a lot bigger now and always waiting to greet us

Yes if I didn’t have animals my house would be cleaner, my money would stretch further, but my heart would be that little bit more empty.